It’s been a week and I think I am only just recovering from the trauma. The JHB road trip had been on the cards for a while. I knew it was there and was looking forward to it about as much as I do my annual gynecologist visit. It’s there in the calendar, but you just ignore it and hope it goes away.

We had bought the boys tickets to see WWE  Wrestling entertainment event in JHB ages ago when it sounded like a good idea, and they had been talking about it for months. There was no way I could get out of this. Trust me I tried. Firstly I thought of grounding the boys, then telling Ngcebo that he couldn’t come with. The thought of those sad eyes staring back at me.. I couldn’t be that heartless and Aiden would have been devastated. I tried to see if flying would be an option. 4 Tickets, R5500 and that was with Kulula special fare sale. I even thought of just sending the boys on the accompanied flight option which it turns out only SAA and BA offer.. for a rather hefty price. Bus? Hmmmm…

But alas, the day before the trip was upon me and there was no getting out of it. The longest road trip ever with the kids up to this point was 2 hours. In fact there was that one time we didn’t even make it to Ballito without threatening to turn around and go home. This was going to be epic and I needed to be prepared. I filled up the car, got the tyres, oil and water checked. Bought a bulk pack of wet wipes and tissues, and I still had a pile of nappy sacks in the car for rubbish ( Hindsight – an entire roll of industrial strength black bags would have been more appropriate). I called my Dr and got my anxiety medication prescription filled. And then headed off to Checkers to fill up 2 snack bags. Rookie error is always forgetting about feeding the rats on the return trip, not me. Nope. I got this.

That evening I let the kids stay up as late as they wanted. My genius “Pinky and the Brain” idea was that they would be so tired the next morning when I dragged them out of bed at sunrise, they would sleep most of the way.

The morning of  the road trip arrived. I woke up with the same trepidation I felt each time we had to take Aiden to hospital for grommets. A long effing day ahead confined in a small space with whiny kids.

I got up early, and packed the car in the pouring rain (so glad I washed and straightened my hair the night before), which included Aiden’s entire collection of soft toys. Yes, the same boy who was going to see huge beefcake guys in costumes beat the shit out of each other on stage.

With the kids in the car, we were all set to go as the sun was coming up. It was 6am. The sat nav said we would be at our destination at 12.15pm. In fact, it gave me a warning when I selected “use as destination” that it was unreachable. See the car sat nav was wise. It tried to warm me. Oh and said Sat nav has the speed limit showing which turned a flashing red if I went over it by even 1km. The boys yelled at me and freaked out so slow and steady it was. Thanks. Thanks a lot. I have affectionately named the Sav Nav Serina the sadistic bitch.

Things were actually going pretty well….that first 35 minutes that is. Kids were calm and settled. They broke into the snack bag and someone asked if we were in JHB yet. Ummm nope… oh dear. And then, someone else spotted the iPads. Drama erupted as my iPad was the only one I could download movies on. The other two I couldn’t due to space issues but it did have games on it for the boys. Of course they all fought over mine. Tears, tantrums and the first stop of the day happened around 45 minutes in, somewhere just past Hilton.

We logged two pee pit stops and two more pull overs on the side of the road, all before hitting the half way point. One adult vs three kids made the pee stops slightly tricky and of course no one wanted to wee at the same stop. Trust me, you wee quicker than the formula one pit crews change tyres when you know the boys are waiting in the car for you.

The second pull over was for the boys to change seats. Which meant they had to drag their bedding out with them so pillows, duvets, soft toys pencil crayons, rollups  and an array of empty snack containers all came tumbling out the car on the side of the N3. Brilliant. We were the bloody Griswolds. National Lampoons JHB road trip.

On the 3rd pull over, I lost my shit, dragged the boys out the car, grabbed the first thing I could lay my hands on…… and klapped  each boy with a takkie, Ngcebo’s takkie. High tops. Ava was in her car seat smiling smugly of course.

A side note, if anyone has put that footage of me up on YouTube, please tag me. I have tried searching for “crazy mom meltdown on N3 motorway near Harrismith takes boys to task with a takkie” but nothing came up.

The second half of the trip up to JHB was a lot better I must admit. Yes we are still on the trip up, if you are tired reading this, think of me… 6 hours people… there and back. Say what you will, but the takkie worked way better than trying to reason with two hyper, over excited, tired, ratty boys on their way to watch the best show on earth ever.  Don’t get me wrong, they were still little shits. At this point NO ONE had slept yet, not an effing wink! My plan gave me the finger and instead of a quiet ride with three snoozing children, I got brats. Tired ratty brats. With only one mode. Whiny.

Every time I heard my name being whined I just turned the music up a notch, sang even louder to my favourite playlist and thought about how I could create a glass sound proof divider between the front and back seats that could fit on all cars. Either that or I was going to trade my car in for a limo. Or one of those half loaf trucks. The little ones. As long as the front was separated from the back, it would tick my requirements. Even a horse and cart. 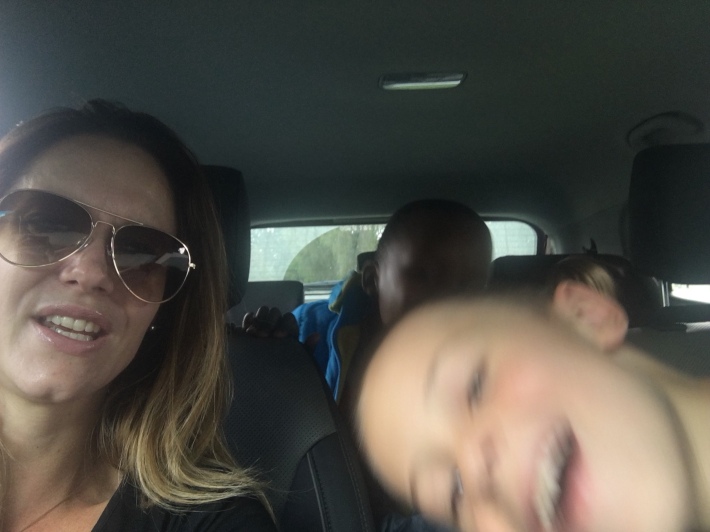 I surrendered my phone to one of them at one point to help keep the peace, under strict instructions to only play the games and nothing else. And of course, they listen to every word right?. I am sure they were just playing Connect the Dots under the duvet. The 7 SMS’s received in succession from Vodacom on Saturday morning suggested otherwise:

One hour and 40 min left to go to our destination and Aiden finally fell asleep. Thank goodness for small mercies. 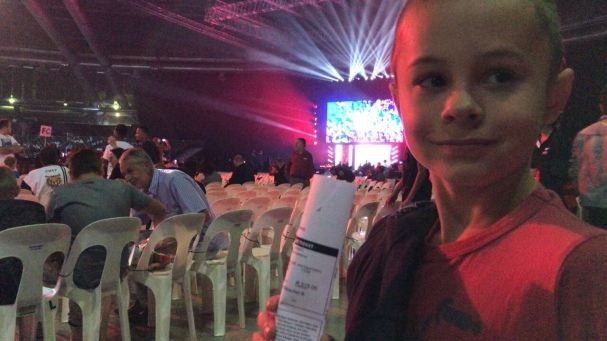 Fast Forward to Sunday. The dreaded drive back.

The second snack bag was in place, car fueled up and checked. As for me, I was still trying to recover from the drive up. No amount of anti anxiety meds was going to help, unless they knocked me out cold and someone else drove the car home. (That was my wish).

I summoned Serina the Sat Nav and pushed the home button. 6 hours, on the dot. Shit I was hoping downhill would somehow shave off some time. With everyone buckled in, after an awesome weekend of WWE wrestling fun, we started the long trek home.

For more information on how the trip home went, go to the top and reread this blog. The only difference is that with the 3rd stop before the halfway point, Ngcebo obviously cottoned on and was a lot wiser and kept his takkies on. So there was nothing substantial for me to klap the kids with. Instead I screamed, cried, begged, pleaded, and yes… I even used emotional blackmail.

“It’s just me guys, on my own. Do you know how hard it is for me to do this drive? [Insert a few sobs here.] It’s scary as hell and I am doing my best not to have an accident while you guys throw pillows, paper, rollups and rubbish at my head. Please, help me out here or I swear to god I will leave you here on the side of the N3 with 376km to go until home. Do you know how long that will take you to walk home? WEEKS! WEEKS!”

[slammed the back door]
Then cursed under my breath for slamming my own car door. Argg.

Don’t judge me. You don’t know what it was like, You weren’t there.

Then it appeared, like an oasis in front of me, the Bergview 1-Stop. Spur! Play Area. Bliss.
I walked in, sat down, ordered tea and didn’t see the kids for at least 15 whole minutes. It was the most amazing 15 minutes ever. They returned, ordered food and then ran off again. Usually I hate it when the food arrives and they take a bite and run off to play, but on this occasion I couldn’t think if anything better. We spent way longer that we should have there. Reluctantly we had to get back in the car.

Again, one hour and 40 min to go until we got home, Aiden fell asleep. Again thank goodness for small mercies.

As I drove into the complex I thought to myself  I wonder if this is how runners feel after finishing the Comrades?  I pulled up and no 4 and dropped Ngcebo off, bag and bedding in hand. He said something along the lines of he didn’t think his Mom was home. I shot him a look and said well go wait on the front door step, and then rolled into my drive.

The kids were out the car before I pulled the handbrake up. Gone…
My pleas for them to help unpack fell on … no one.

And then I opened the back doors.

A sharp shooting pain went up my left arm. My heart rate went through the roof. I was battling to breathe. I was certain I was having a stroke or a heart attack. My car looked like the morning after scene in the Hangover.  There could well have been a tiger somewhere in there for all I know. I have seen teenage house parties in the Burra (my old hood) look better than the state of my car. 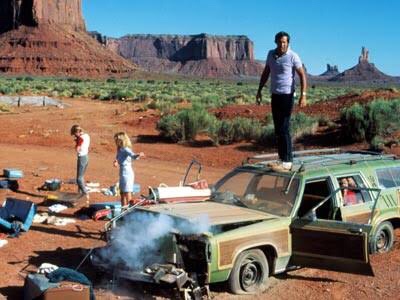 It has taken me a week to finally put pen to paper and tell my story. I was traumatised. Broken. After cleaning up the car, unpacking, and then repacking for my trip to CT the following morning, I politely and calmly advised my offspring that I would be retiring to the bathroom where I would be soaking in the tub in an attempt to decompress, recompose and search for some semblance of sanity. Their understanding and cooperation would be appreciated.

Yup, you guessed it, 30 seconds later I was ordered to spell out the names of EVERY SINGLE WWE wrestler for Aiden to write out, right there on the bathroom floor, along with Ava who was not about to miss out on the action. 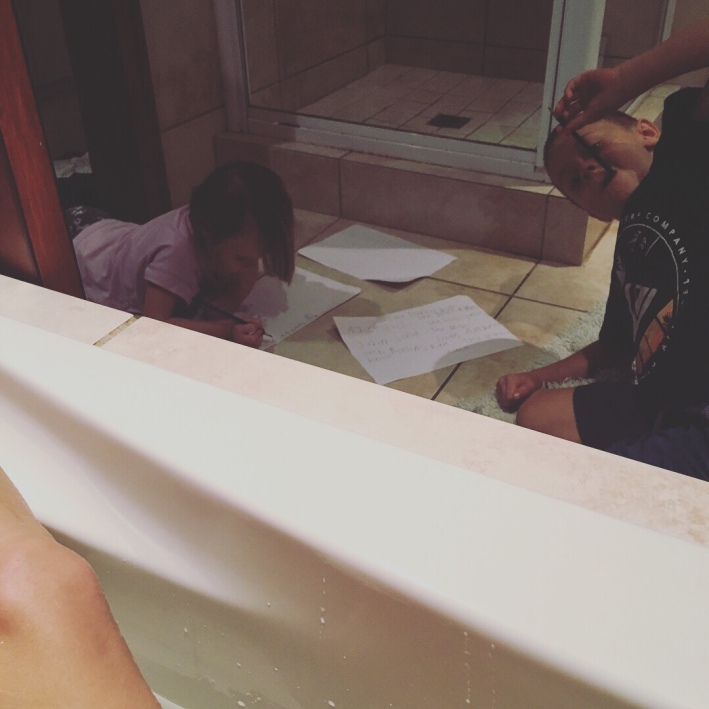 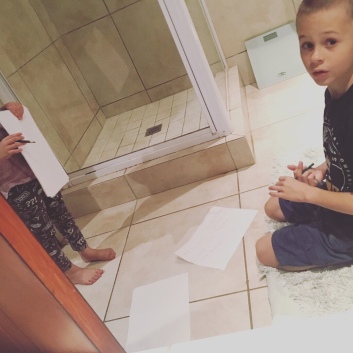 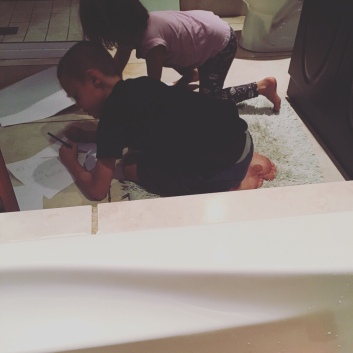 Processing…
Success! You're on the list.
Whoops! There was an error and we couldn't process your subscription. Please reload the page and try again.